The City of Hayfield found a unique way to boost community involvement in planning for a Safe Routes to School grant with the Minnesota Department of Transportation. 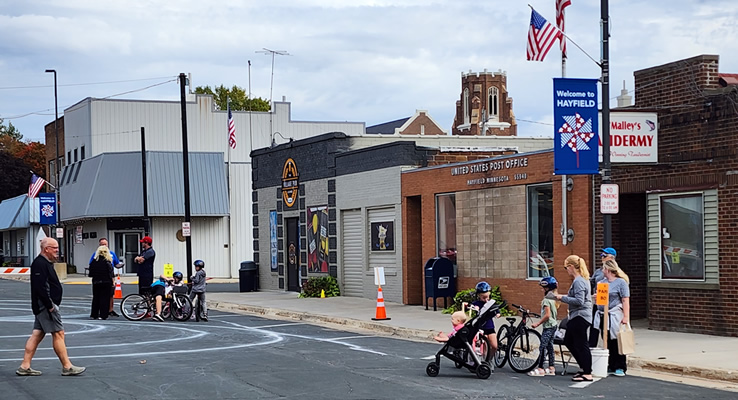 With a school just off two of the busiest roads in town, the city recognized the need for safer ways for students to walk or bike to school. Hayfield was awarded a Safe Routes to School planning grant through MNDOT, authored by CEDA team member Rebecca Charles. The current project will entail the construction of radar feedback signs and trail development. MNDOT required a community input team for the project, something which the city and school initially struggled to assemble.

Charles worked with city officials to host a bike rodeo-an event to promote healthy, active living, promote the Safe Routes to School project and recruit locals interested in the project to the community input team. Charles sought funding from the Southern Minnesota Initiative Foundation for the rodeo, as well as the purchase of a fleet of bikes to be made available for rent at no cost to community members and visitors.

“The goal was to bring together people who love biking and active living,” Charles said. “We got lots of input and it was so well attended that we were able to build our new parks and trails committee.”

Charles said the new parks and trails committee is engaged on the Safe Routes to School project and other active living programs throughout the city. The committee will determine the best locations for trails, crossings and other safety features.

Looking to the future, the city will continue its work with MNDOT on the Safe Routes to School planning process, after which Charles will work with the city on a full grant application for the program.