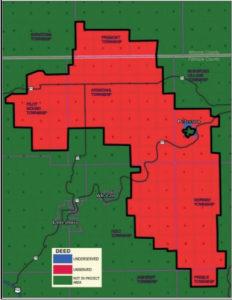 On Thursday, January 28, Minnesota Governor Tim Walz announced that the MN Department of Employment and Economic Development (DEED), in its sixth year of the Border-to-Border Broadband Grant Program, awarded 39 of 64 Broadband project requests submitted from around the State, totaling about $20.6m in funded projects.

Among them, AcenTek was awarded a $1,492,096 request for a $4,973,654 project to build fiber optic infrastructure for 374 unserved and underserved homes, farms, businesses, and community institutions in Rural Peterson, MN. AcenTek’s match included a loan from Fillmore County.

Last year, DEED Border-to-Border awarded AcenTek nearly $2.9m to build fiber optic infrastructure in Rural Houston, MN. CEDA’s Community Grant Specialist, Abby Wright, who authored the applications, says, “For the past few decades (pre-COVID), high-speed internet has been a daily tool for the average American—Now it has become a glaringly obvious need, as people’s health, livelihoods, and education are on the line, quite literally.”

Upwards of 415 people live and/or work in the project area in Chatfield, Lanesboro, Peterson, Rushford, Rushford Village, Utica, and Winona. At least 138 of these people are students, and at least 89 are employed individuals who indicated that they could have worked from home during the pandemic had they had reliable connectivity.

“The quantitative data are telling but only half the story,” Wright says, “We’ve read the firsthand daily challenges that people without Broadband face, and they are concerned about their health, family, safety, productivity, entertainment, education, economy, and their connection to their community and the world. It is a privilege to work with AcenTek and our partners to make these projects happen.”